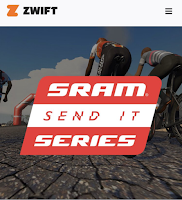 I lined up last week for the first round of the 2020 SRAM Send-it Series, and I was sent, with a capital S!

With over 600 on the start line, and being a categorised A ride in Zwiftpower, I thought top 100 no worries.

Just a side note, Race 1 was in Crit City; I'm pretty sure this is one of the hardest courses going. In real life you'd normally like a fast flat crit circuit (as long as the corners where't too technical), where you could float along in the wheels. Not Crit City - this is 99% on the pedals, 77% at threshold or above!

Back to the race. Knowing the number of starters, I joined the race as soon as the 'join' button came up (I was still beaten by 48 others) and tried to relax. A couple of seconds before the go I wound up the power and got a good start - in the first few off the line ✔️.

This didn't last though, I was going full gas and riders were streaming past me, it was like I had no draft. After a km or so, I was down to in the 60's, still going backwards, when Ben Hill flew past. This situation IRL - I'd kill myself to jump on the wheel. Unfortunately, this is not IRL.

Equilibrium between my speed and the bunch finally came when I was down in the low 100's, during the second lap, and we were all single file. Just like real life, I no longer had any control over my race and was just following the wheel in front.

And that was my race, further complicated after 5 laps or so, as when we started lapping riders (all wearing the same kit) it was hard to know if you're following a faster rider or getting stuck into the vortex of a slightly slower rider, albeit one lap down. By now I was just intent on holding my position to the line, where I finished in the 120's.

Gotta say, was a bit disappointed to not be top 100, so out came the analysis!

My 5min power and and W" depletion both corresponded with my finding my place in the race in the low 100's. So in conclusion, my best possible result on pure numbers was going to be 90-100 anyway!
Race 2 is the Jungle Circuit - an uphill drag start and a circuit with more variation in power levels - I'm starting again with top 100 ambition, although again I'm in the top 90-100 on rankings!
Top 100 sounds so easy!